Once Upon A Spine

Welcome back! We took a week off to enjoy a break and now I am excited to share a book that will certainly make you think you are having adventures in Wonderland. Kate Carlisle’s latest mass market book is Once Upon a Spine and it all centers around Brooklyn and Derek’s upcoming wedding. I think I loved that this was about their families and the light hearted side of wedding planning and not just a mystery.

If you are looking for a yummy treat this book hosts so much food you will be craving to eat the pages by the end of it. Read this and eat cake! We have a wedding coming soon!

Once Upon A Spine 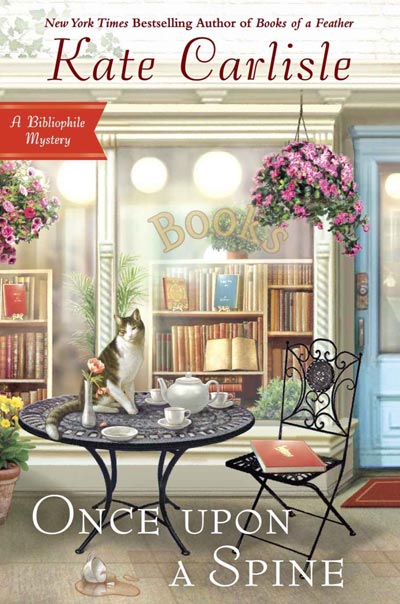 In this Bibliophile Mystery from the New York Times bestselling author of Books of a Feather, San Francisco bookbinder Brooklyn Wainwright stumbles through the looking glass in a tale of murder, rare books, and a quest for the perfect pie…

Brooklyn’s oh-so-proper future in-laws are traveling from England to meet her, and if that’s not enough to set her on edge, rumors abound that the charming Courtyard shops across the street may be replaced by high-rise apartments. Their trendy neighborhood will be ruined unless Brooklyn and her fiancé, Derek Stone, can persuade the shopkeepers not to sell.

But with a rare edition of Alice’s Adventures in Wonderland causing bad blood at the Brothers Bookshop and a string of petty vandalism making everyone nervous, Brooklyn and Derek feel like they’re attempting six impossible things before breakfast. Then the owner of the Rabbit Hole juice bar is felled by his own heavy shelves, and the local cobbler lies dead beside him. An accident . . . or something more sinister? Things get curiouser and curiouser when a second priceless copy of Alice is discovered. Will it stir up more trouble within the close-knit community?

As the Brits descend, Brooklyn learns they’re not so stuffy after all. Derek’s dad is won over with chocolate cream pie, and his psychic mum would kill to help Brooklyn solve this murder—before another victim takes a tumble.

A native Californian, New York Times bestselling author Kate Carlisle worked in television for many years before turning to writing. A lifelong fascination with the art and craft of bookbinding led her to write the Bibliophile Mysteries featuring Brooklyn Wainwright, whose bookbinding and restoration skills invariably uncover old secrets, treachery, and murder. She is also the author of the Fixer-Upper Mysteries featuring small-town girl Shannon Hammer, a building contractor specializing in home restoration.

You can find Kate on: 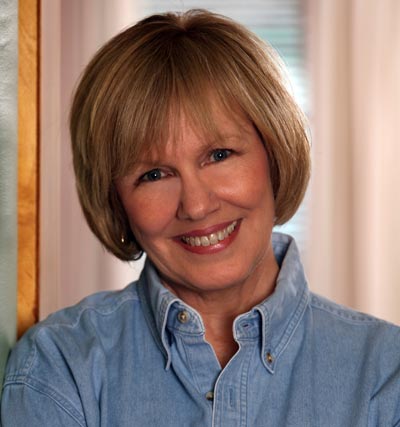 I am  not sure if I am suppose to envision the Alice in Wonderland book with this story but I did with a few characters. I really loved that we got to meet Derek’s parents and that things went smoothly, well besides for murder. But truly, I think this book was different from the rest because the author is getting us, the readers ready for the wedding and it is sure to be a beautiful one!

I really got a vibe for Twiddle-Dee and Twiddle- Dumb from Alice in Wonderland with the brothers in this book. I could easily see them acting as these two did in the classic book. We have so many vibrant characters in this book that you could see Brooklyn as Alice and others as characters there. Plus, there is Rabbit a juice making man, see the tea party in your mind yet?  They are all a bit mad in the end of this book but I laughed and smiled through it all.

Derek and Brooklyn’s parents getting along was a huge hit for me. I really loved that they were able to come together and help plan the wedding with these two. Weddings aren’t easy but it goes easier with family being happy.

Between meeting parents, solving a murder, and saving a book this was one of those quick and easy mysteries to read. It will leave you wanting more not only in the series but also from the food that is thankfully mentioned and given recipes for in the back. So I hope you will enjoy this light hearted read that is sure to get readers ready for the chapel!

What classic book would you love to discover in a rare edition? Share and you could win a copy of Once Upon a Spine!