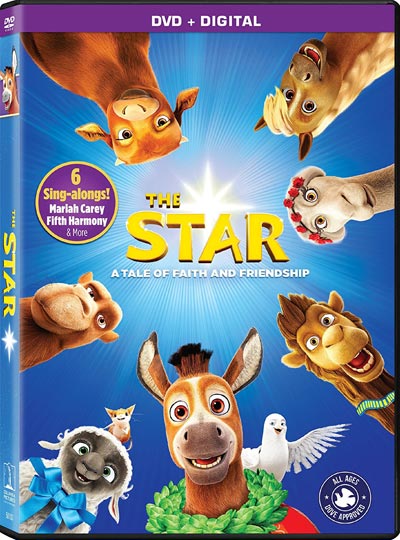 A Movie with a message

From the studio that brought you MIRACLES FROM HEAVEN & CLOUDY WITH A CHANCE OF MEATBALLS comes the timeless tale about faith, friendship, and the importance of believing in yourself. AFFIRM Films and Sony Pictures Animation’s THE STAR arrives for the first time on Digital on February 6 and on Blu-ray + DVD + Digital February 20 from Sony Pictures Home Entertainment. The heartwarming animated comedy follows a small but brave donkey named Bo (voiced by Steven Yeun, “The Walking Dead”), who yearns for a life beyond his daily grind at the village mill. One day he finds the courage to break free and finally goes on the adventure of his dreams. On his journey, he teams up with Ruth (voiced by Aidy Bryant, “Saturday Night Live”), a lovable sheep who has lost her flock and Dave (voiced by Keegan-Michael Key, Friends From College), a dove with lofty aspirations, along with three wisecracking camels

voiced by Tracy Morgan (“30 Rock”), Tyler Perry and Oprah Winfrey. Bo and his new friends follow the star and become accidental heroes in the greatest story ever told. Rounding out the all-star voice cast including Gina Rodriguez (“Jane The Virgin”) as Mary,

(“The Middle”) as Edith the cow, Emmy® and Tony® Award-Winner Kristin Chenoweth as Abby the mouse, and Christopher Plummer (All the Money in the World) as King Herod.

THE STAR is filled with more than an hour of engaging bonus materials including the “Star-aoke: Sing Along with Bo &amp; Friends,” a dance along to “Life Is Good” by A Great Big World, plus a collection of fun lyric videos that will have you singing along to the inspiring music from THE STAR. Families can enjoy crafting and baking with “how-to” videos “Star Mason Jar Votives” and “Sweet and Sparkly Stars,” and they also can go behind-the- scenes to explore the amazing talent who bring these characters to life. In “Faith All Year Round,”

renowned pastor and motivational speaker, DeVon Franklin delivers a fun and engaging children’s sermon discussing the themes of the film and keeping the spirit of this inspiring story alive in us every day.

THE STAR is directed by Academy Award® nominated writer/director Timothy Reckart, screenplay by Carlos Kotkin, and story by Simon Moore and Carlos Kotkin. The film is executive produced by DeVon Franklin, Brian Henson and Lisa Henson, and produced by Jennifer Magee-Cook. The Star is presented by AFFIRM films and Sony Pictures Animation in association with Walden Media, Franklin Entertainment and The Jim Henson Company. The uplifting theme song, “The Star” by Mariah Carey and veteran songwriter Marc Shaiman was also nominated for a 2018 Golden Globe Award for Best Original Song. “The Star” song is now available on The Star: Original Motion Picture Soundtrack, which assembles new music from a bevy of powerhouse superstars. 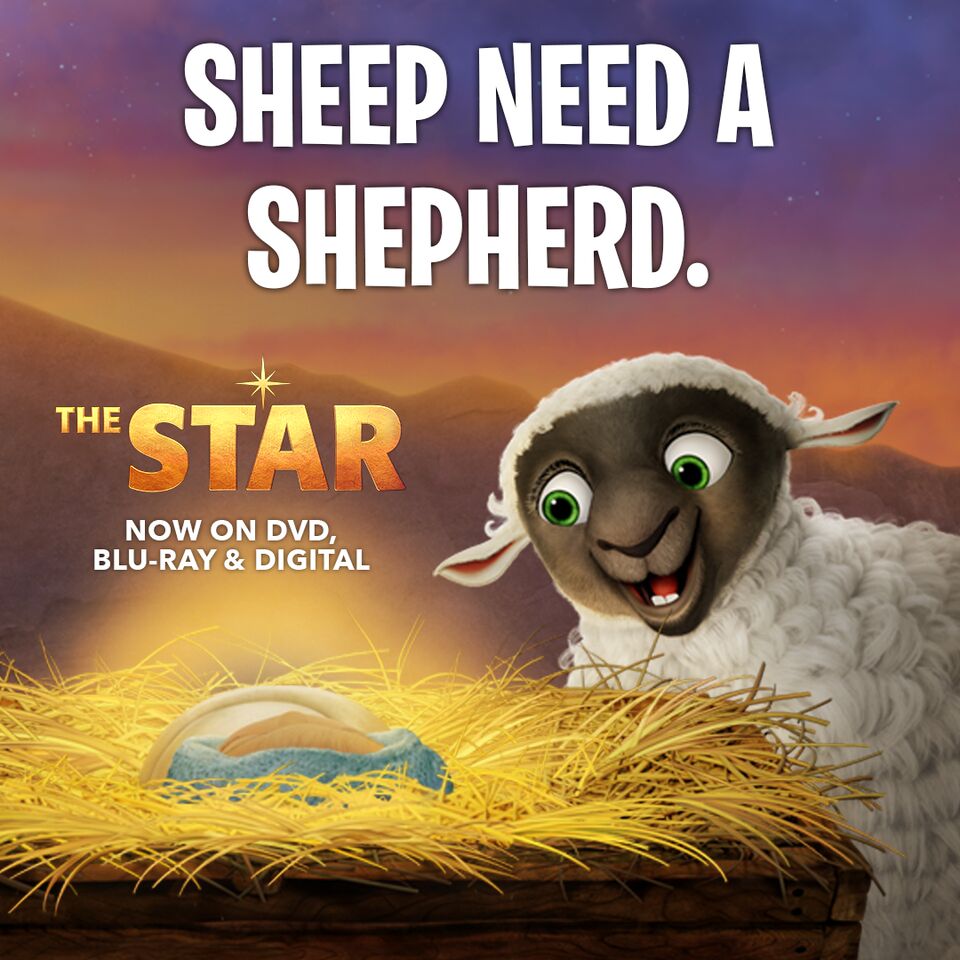 I have to say this is one of our favorite movies, and It is finally out on DVD!!! I am thrilled to offer you an interactive Bible Study through Facebook messenger with Devon Franklin is “interactive and super engaging”.. Here are the directions and the image you will need. 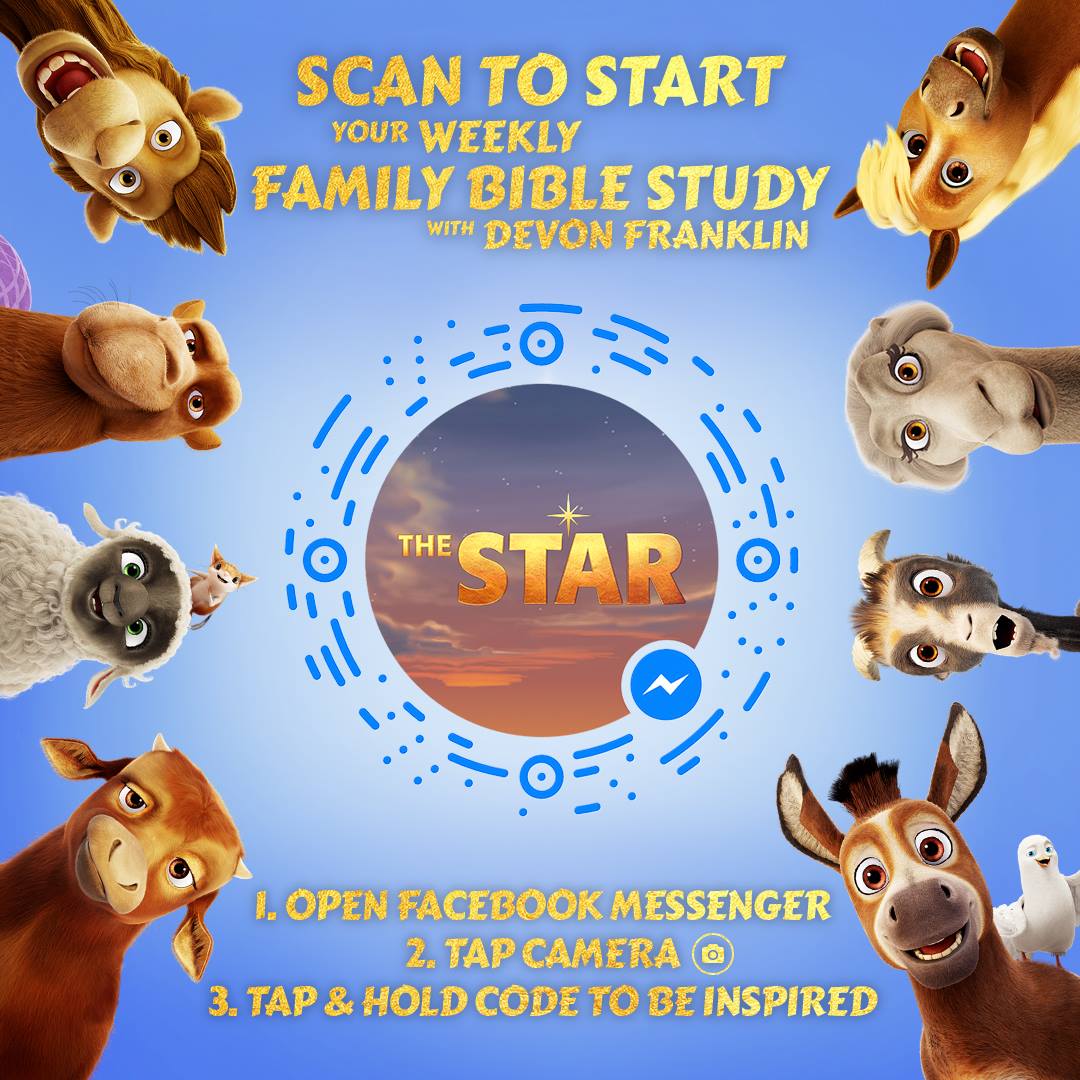 Have you seen The Star?