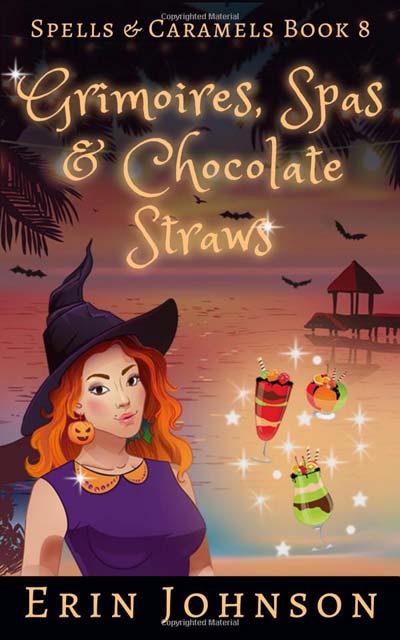 Stranded on Badlands Island, Imogen Banks is driving herself crazy looking for her brother. So when the spell-casting baker’s friends suggest they escape for a luxurious dragon spa treatment, she doesn’t need a second invitation. But her hopes for coastal romance with Hank fall flat when a resort guest turns up roasted in the sand.

Suspecting murder, Imogen zeroes in on the town’s rumored “black widow” as a possible culprit. But when her friend falls for the beautiful woman despite the deadly track record, Imogen fears he’ll be the next victim to stay buried.

Can Imogen sift through the clues before the killer gives her one final treatment?

In the latest master mystery from Erin Johnson, Imogen is on a mission to find her brother and have som R&R as well. But this isn’t quite what happens. Imogen stumbles upon another murder and this one has a possible death trap to men involved. I really like the fun that this author always brings to her stories. Imogen grows in each new book and becomes a stronger character. If readers are looking for a strong mystery with unique and charming characters then this is the book for them. I couldn’t put it down and finished it so fast that now I am eagerly waiting for the next one.

Everyone who comments about why they want to read this book will be entered to win a copy from the author, giveaway ends 1/16/19.