Bad Day for a Bombshell—Cover Reveal

December 5th, 1941.  Sometime Houston socialite, Tracy Truworth, is always on the lookout for something suspicious, especially after growing up with her nose in the latest Katie McClue mystery novel, a series featuring a twenty-something female detective and her constant feats of derring do.  And for Tracy, escaping reality through reading couldn’t come at a better time, since her own life isn’t exactly going along like she’d hoped, considering her overbearing mother insists that Tracy marry Michael — a lawyer likely to be a U.S. Senator someday — in a wedding rivaling royalty.  Yet everything changes for Tracy when she spots a bleach-blonde bombshell on the train home from Dallas after a shopping trip to Neiman Marcus.  Because something certainly seems amiss with the blonde, given the way she covertly tries to snare men into her lair, and considering she ceases all flirtations when a Humphrey Bogart lookalike suddenly appears . . . complete with a mysterious package wrapped up in newspaper and twine.

But days later, Japan bombs Pearl Harbor and a few days after that, Germany declares war against the U.S.  Rightly so, President Roosevelt returns the favor.  And soon Tracy finds herself caught up in the War, just like the rest of the nation.  But it’s her curiosity that leads her on a collision course with a killer, and she arrives at the bombshell’s apartment only moments after the blonde is murdered.  Though Tracy is accused of the crime at first, she soon finds herself working as an Apprentice P.I., under the tutelage of a real private investigator.  Soon, they’re hot on the trail of the bombshell’s murderer.  From singing at the hottest nightclub around, the Polynesian Room, to a car chase in her 1940 Packard, Tracy’s investigation takes her far from her blue-blood upbringing.  It isn’t long before she finds the War is hitting a lot closer to home than she ever imagined . . . And danger isn’t much farther than her doorstep .

Snippet From The Book

Suddenly I felt a strange tingling across my skin, like something mysterious, maybe even dangerous, was about to happen. My mind instantly went back to the latest Katie McClue novel I’d devoured. The mystery series had been my favorite since I was in my teens, and this newest episode, The Case of the Stolen Sapphires, had started out on a train. And like most of the adventures of the 21-year-old detective, a massive thunderstorm had blazed and boomed in the background.

Cindy Vincent, M.A. Ed., is the award-winning author of the Buckley and Bogey Cat Detective Capers, a mystery series for kids and cat-lovers that features the adventures of two black cat detectives. And yes, as she is often asked, Cindy used her own black cats, Buckley and Bogey, as the inspiration for the series, since they seem to run surveillance on her house each and every night. Cindy is also the creator of the Mysteries by Vincent murder mystery party games and the Daisy Diamond Detective Series games for girls, along with the Daisy Diamond Detective novels, which are a spin-off from the games. She lives in Houston, TX with her husband and an assortment of fantastic felines. Cindy is a self-professed “Christmas-a-holic,” and usually starts planning and preparing in March for her ever-expanding, “extreme” Christmas lights display every year . . . 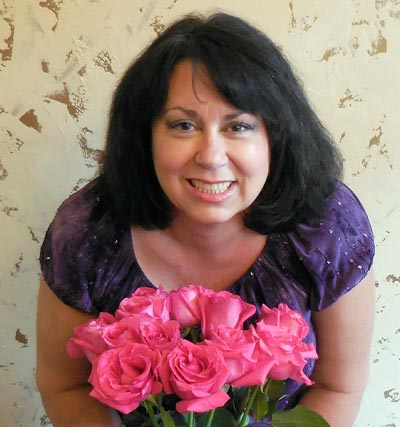 10 Behind the Scenes Facts About the Book

Thank you to Singing Librarian Blog Tours for the questions provided.

Bad Day for a Bombshell is the first in my new series, the Tracy Truworth, Apprentice P.I., 1940s Homefront Mysteries.  It is a historical cozy mystery novel, with equal emphasis on both history and mystery.  (And a smidgen of romance added in.)  Yet even though WWII is certainly a serious subject, this book is written with a bit of levity in spots, in keeping it true to the cozy mystery genre.  As with my other mystery series, the Buckley and Bogey Cat Detective Capers, these books will be stand alone.

What is the hardest part about being a writer? The easiest?

Ha!  For me, the hardest part about being a writer lies in trying to coordinate my creative, writing life, with what is probably considered a normal/regular nine-to-five, sunup-to-sundown kind of world.  Because, when I’m burning rubber on the keyboard and deep into whatever book I happen to be working on, I lose all track of the hours and any sort of schedule.  Were it not for the others in my household who want to eat on time and need to be in bed at a certain time, I would probably grab a snack here and there, and a nap or a few hours of sleep, and then just keep on going.  Because creativity doesn’t seem to work according to any timetables.  Inspiration has a bad habit of waking a person up at night, and the right scenes and the right characters often come into a person’s head just as everyone else wants to go to bed.  It’s wonderful and annoying all at the same time.  But let’s face it, if a writer wants to have a marriage, and a family, and friends, well, there has to be some compromise between the “regular” world and the creative world.
As for the easiest part of being a writer, I would say that it’s simply the joy of writing in and of itself.  There’s just nothing quite like the opportunity to create something out of absolutely nothing.  It’s such a privilege to be able to invent an entire world, along with characters, and then create their storyline, too.  As Einstein once said, “Knowledge is limited.  Imagination encircles the world.”

How do you break out of a “writer’s block” shell?

Years ago, when I worked as a magazine editor, and then later, when I wrote murder mystery party games for my own company, I learned that meeting a deadline was important to one’s continued employment . . . meaning, if you don’t meet your deadline, you probably won’t be working anymore.  So I knew I couldn’t afford to have writer’s block.
That’s when I called on my Psychology background and took a look at something called Pavlov’s Dog and Classical Conditioning.  For those you who ever took Psychology 101, you probably remember that a Nobel-Prize winning guy named Ivan Pavlov taught his dog to salivate by merely ringing a bell.  But first he taught the dog to associate food (which made him salivate) with the sound of a bell ringing.  So I thought, why couldn’t the same or similar principle be used when it came to writing?  I decided to give it a try.  I started by playing classical music every time I was really in the zone with my writing and my fingers were flying on the keyboard.  In fact, I played the same song during these times.  Then, whenever I was feeling a bit sluggish in my creative processes, I tried the technique in reverse.  I played the music, which I now associated with excellent writing moments.  For me, the trick worked and I was able to write like I normally would.  I had learned to associate that particular music with writing.

Who are some of your favorite authors?

Oh, my goodness . . . how much time do you have?  I have so many “favorite authors” that I wouldn’t have time to list them all here . . . probably like most writers.  But if I had to pin it down, well, of course, the name Agatha Christie immediately springs to mind.  I love her inventiveness, and her ability to surprise readers with that all-important twist at the end of the mystery.  She must have been the Queen of the unexpected ending!  But my absolute, all-time favorite author is Dorothy Cannell.  She had me hooked at her very first book, The Thin Woman, and then onto The Widow’s Club and How to Murder the Man of Your Dreams.  Her work has such fabulous tongue-in-cheek humor, and I’m always laughing when I’m reading along.  She also creates characters that are fantastically well developed, so much so that I feel like I know them.  In fact, if I’m having a bad day, I pull one of her books from my shelf and read away.  It’s like visiting a favorite old friend, and it always cheers me up.

What kind of research did you do for this novel?  What did your writing process look like?

Like they say, when it comes to writing a historical novel, the research is half the fun.  And as a fan of WWII history, I’ve amassed an amazing collection of books, papers, and other downloads that pertain to WWII and the 1940s in general.  (In fact, I hope I don’t have any visitors for a while, since all this stuff is taking up a big chunk of my guest room at the moment.  Ha!)  Then, before writing this book, I dove in and devoured nearly all these books.  But I also visited the fantastic National WWII Museum in New Orleans, as well as watched tons of old movies and documentary videos.  I attended old car shows, so I could see exactly what kind of car my character might drive.  And, so that I could “walk a mile in her shoes,” so to speak, I actually wore dresses nearly every day for a month (since women rarely wore pants back in the 1940s) as I went to work in my home office to write this book.  That was a learning experience in itself, since, well, a girl operates a little differently with a dress on.  And now, oddly enough, I actually found that I prefer to wear a dress or a skirt, since frankly, they’re pretty comfortable!

What inspired the idea for Bad Day for a Bombshell?

Quite frankly, this book was inevitable.  I’ve long been a fan of the old mysteries, those that were actually written in the 1930s and 40s.  Top that off with a love of vintage clothing (I’ve been a collector for a couple of decades), and a love of swing dance and big band music . . . and well, I just knew that someday I’d write a 1940s/WWII mystery novel.  I’m surprised that it took me this long to get to it, but I had too many other projects going before this one.  (So many books to write, so little time . . .)  As for the specifics of the plot-line, amazingly, I started out with one plot-line, but the more I got into the story itself and the more I got to know my characters, well, the more I realized my first plot-line just wasn’t the right one for this book.  Not only that, but the first time I wrote my lead character, Tracy Truworth, I gave her the profession of being a newspaper reporter, kind of a Brenda Starr-type character.  Yet the more I developed my heroine, the more I saw that she needed a different occupation to suit her personality.  So I gave her the goal of being a Private Investigator instead, with her starting out as an Apprentice P.I.  So I veered off the original plan and let the story go in a completely different direction.  I have to say, I’m very glad I did.  It’s a much better fit, especially for a mystery series. 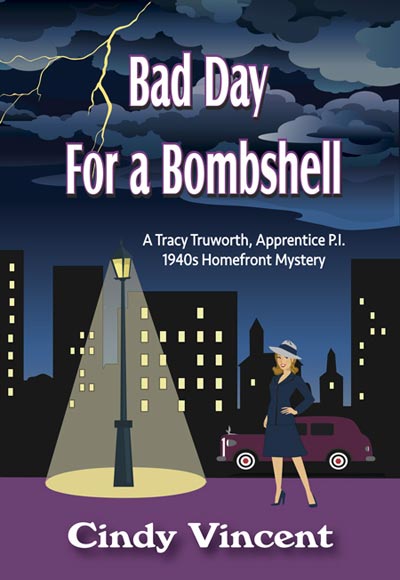 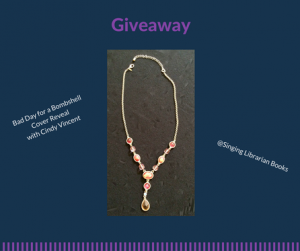