Ask Me No Questions 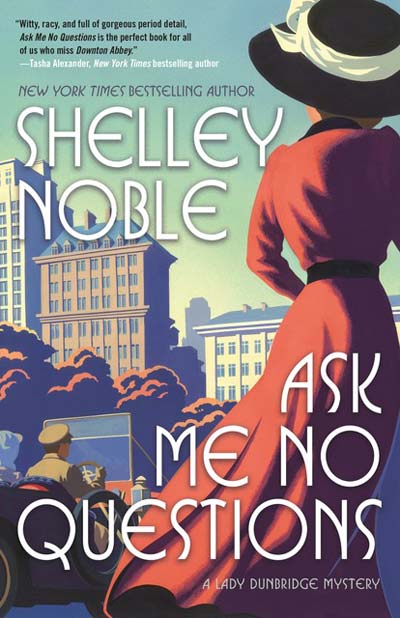 A modern woman in 1907, Lady Dunbridge is not about to let a little thing like the death of her husband ruin her social life. She’s ready to take the dazzling world of Gilded Age Manhattan by storm.

From the decadence of high society balls to the underbelly of Belmont horse racing, romance, murder, and scandals abound. Someone simply must do something. And Lady Dunbridge is happy to oblige.

Philomena Amesbury, Lady Dunbridge, glanced at her lady’s maid who stood beside her, clutching the rail of the SS Oceanic, her eyes wide.

“Only speak in English or French, Lily,” Lady Dunbridge reminded her. “And try not to gape. It’s merely another large city, much like London.”

The steamship had slowed to a crawl as tugboats navigated it up the busy Hudson River toward Chelsea Pier, and it was a remarkable view. The skyline of tall buildings passed before them like Edison’s motion pictures, just as exciting and more than a little daunting. Lady Dunbridge could sympathize with the girl’s amazement.

Not bad, Philomena thought, considering she’d been a lady’s maid for less than a week, after Lady Dunbridge had snatched her from the jaws of the London immigration police who had caught her attempting to stowaway on the ship.

At the last minute, Lady Dunbridge’s own maid had refused to board. Stuck between a rock and the deep, blue sea, and after much argument from her traveling companion, Preswick—her devoted if somewhat long in the tooth butler—and promises not to run away the minute they landed in New York from Lily, Lady Dunbridge had paid her passage. Admitting defeat, Preswick spent the seven days at sea, transforming the girl into a semblance of a lady’s maid.

He’d done an excellent job with a very apt pupil.

Lady Dunbridge smiled encouragingly at the young woman, who was now her servant and confidante. She was a tad too exotic looking for a lady’s maid, dark hair and flashing eyes with a renaissance painting complexion, which appealed to Philomena.

She’d stubbornly refused to tell her name—Philomena decided to call her Lily because of her complexion. Where she’d come from—certainly not the slums of London or Barcelona—nor her age. She was possibly youn ger than she looked. Regardless, she was younger than Philomena who was leaning closer to thirty than twenty.

She was a little rough around the edges but not vulgar, and very willing to learn. Most surprising she was fairly fluent in three languages. Now if she kept her promise not to bolt as soon as they landed . . . “Speak in English or French . . . but listen in Spanish.”

Lily frowned then flashed her a grin. “Oui, Madam. I understand completely.”

Ah, thought Lady Dunbridge. There was hope for this trip yet.

The ship finally maneuvered into the wharf and the engines were cut, the constant rumbling giving way to the clatter of carts and carriages on the uneven paving stones. Newspaper boys and urchins cried for coinage. A band was playing and she caught a glimpse of placards rising above the heads of people waiting on the street. Burly dockworkers hefted trunks and crates to their backs and lugged them through the waiting crowd, while cart boys darted in and out of the bystanders with a dexterity that belied their small statures.

There were even two automobiles, one black and one yellow, the latter she knew from Bev’s letters must belong to Reggie Reynolds. Of course Reggie would want to show off his new automobile. He had promised to meet them at the pier and drive them to the Reynolds brownstone on East Sixty Eighth Street, while their coachman conveyed her servants and baggage in the town carriage.

The wind whipped up, rustling the ostrich plumes of Philomena’s hat, and she held it to her head with one hand while she tried to catch sight of Bev or Reggie. It was impossible in the crush of people.

The captain approached her and bowed. “Lady Dunbridge. It has been a great pleasure to have met you. I hope you enjoy your visit. May I?” He offered his arm and personally escorted Philomena and her entourage of two to the gangplank, where the purser urged everyone toward the pier and the carte de visite agents. The captain kissed her hand before bidding her adieu.

But at the bottom of the gangplank, Lily balked. “What if they won’t let me in? What will I do?”

“Just be calm and look lovely,” Philomena reminded her. “You have a perfectly acceptable carte de visite.”

“And perhaps a tad illegal?” added her faithful butler.

Philomena shot him a warning look. “It was drawn up, albeit hastily, by a member of the immigration service.” At least she was fairly certain he worked for that branch of government. “No matter, where there’s a will . . .” Lily certainly had the will; Philomena had merely given her the way. They should get on just fine.

They stopped at a customs desk and had their cartes de visites stamped—including Lily. Philomena sent the two off to claim the baggage and hire a carter to bring their trunks to the carriage. Then she followed the other passengers through the dark wooden reception hall to the street.

As she stepped out from the tall wide arches, she was hit with a cacophony of sound and a sea of faces. Old and young, clean and dirty; friends meeting friends, families hoping to find their relatives, all were intently watching the opening to the wharf, seemingly oblivious to the traffic and noise around them.

Bev stood at the very front, accompanied by a servant, liveried in maroon and gold.

Philomena’s smile widened. She was always amused by these American affectations, but she loved Bev and if Bev wanted a driver who looked like he just stepped out of some moldy aristocratic castle—hers for example— Bev should have him.

She was dressed in the latest mode as always. Lady Dunbridge’s own plumed hat paled beside the clamshell Bev wore rakishly angled over one eye. Its green and beige aigrette feathers made a delicious comment on the turquoise bolero jacket and skirt she was wearing with such panache. Philomena remembered seeing its sister design in the Paquin showroom on her last trip to Paris. No longer behind the time, these Americans.

She raised her hand to wave, but Bev abruptly turned away, hurried off in the opposite direction and quickly disappeared from view.

Taken aback, Philomena looked to the servant who was staring open-mouthed after his mistress. He roused himself and hurried to Philomena.

“Lady Dunbridge?” The driver yelled as the band marched closer and the noise grew louder.

“Mrs. Reynolds has . . .” He darted a look in the direction Bev had taken. “. . . has gone to fetch Mr. Reynolds and the auto. I’ll wait here and transport your trunks and servants in the carriage.” He gestured over the crowd to where a well appointed carriage was in the care of two footmen.

His voice rose over the nearing oom-pahs. “Bentley, Ma’am.”

“Bentley,” she acknowledged at the top of her lungs. His name rang out in the sudden quiet as the band tumbled to the end of what Philomena now recognized as “Onward Christian Soldiers.” “My butler and maid should be arriving short—”

A pop, like a champagne cork, cut through the air. Someone was already celebrating. Except the pop was followed by a high-pitched piercing scream. Not champagne, but a gun shot.

Bentley jerked and at first Philomena was afraid he’d been struck, but he spun on his heels and began running through the crowd toward the yellow touring car.

“Bev!” cried Lady Dunbridge. She lifted her skirts and raced after him.

They had to fight their way through the crowd, half of whom were fleeing in all directions. The band and sign-carrying women marched past, cutting off their progress.

“The Women’s Temperance Association,” Bentley said as he danced around the edges of the parade looking for a way around them. The music started up again. Bentley plunged through. Lady Dunbridge plunged in after him.

When she made it to the other side, her hat was pitched forward due to coming into contact with a tuba; the nest of ostrich plumes covered both eyes. And she’d lost a button from her kid glove where it had caught on the stick of one of the placards.

A crowd was pressed around the touring car but there was no sign of Bentley or Bev. Philomena pushed the ostrich plumes from her face and squeezed through to the front.

She was met by a horrible tableau.

Reggie Reynolds was sprawled across the back seat, one foot on the floor, one arm dangling down from the seat and his head cradled among the skirts of a woman’s lap. Blood oozed past his vest, edged the lapels of his sack coat, and spread across the white shirt beneath.

Bev clutched at the open automobile door and stared at the scene.

“Why? Why did you do it, Reggie?” cried the woman in the auto, who was looking decidedly pale and awkward beneath her wide brimmed platter-sized hat. “Why did you kill yourself?”

“Murderer!” cried Bev, and reached out as if to reclaim her husband, who it seemed to Philomena was beyond reclaiming.

As SHELLEY FREYDONT she is the author of the CELEBRATION BAY FESTIVAL MYSTERIES (Berkley Prime Crime) as well and two other mystery series, and the upcoming Gilded Age Newport Mystery series. Her mysteries have been translated into ten languages.

A former professional dancer and choreographer, she most recently worked on the films, Mona Lisa Smile and The Game Plan. Shelley lives near the New Jersey shore where she loves to discover new beaches and indulge her passion for lighthouses and vintage carousels.

You can find Shelley Noble on: 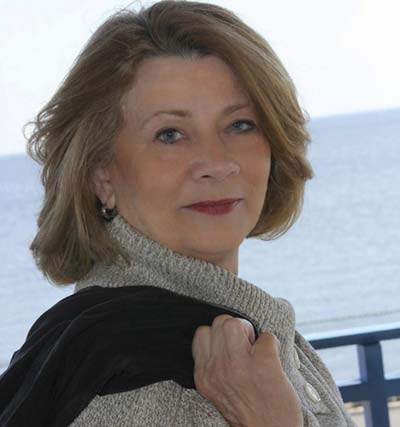 This was a lovely book to read and I have certainly gathered Lady Dunbridge into a favorite sleuth category. I really loved the historical setting and moments in this book. The strength of Phil (Lady Dunbridge) is something that propels her to the top of female sleuths. I think I loved seeing such a strong female for the time period of the setting. If you ask me, this book and this series is one to watch and enjoy. I am eager for my next mystery with Lady Dunbridge.

November 27 – Escape With Dollycas Into A Good Book – REVIEW

December 1 – The Power of Words – REVIEW

December 8 – Here’s How It Happened – SPOTLIGHT

Rafflecopter giveaway: (4) Print Copy – Ask Me No Questions: A Lady Dunbridge Mystery by Shelley Noble – With Drink Coasters made for this title. (U.S. Only) .

Purchase "Ask Me No Questions" on Amazon
Follows