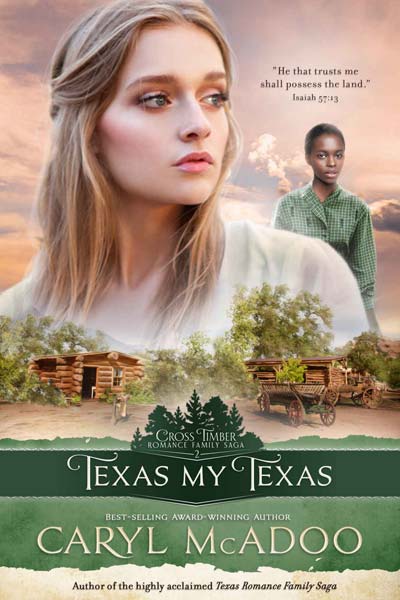 He who puts his trust in God will possess the land and inherit the blessings.

Scripture tells a husband to love his wife, but what if she loves the memory of a dead man? Lured to the Texas frontier by more free land than they could ever buy, four families struggle to carve a home and a living out of the western wilderness. And though love isn’t always easy coming, like bees to sweet flowers, a neighbor and his partner swoop in hoping to steal the hearts of the clan’s two young beauties. Will their infants spoil the ointment? Predator animals, Indians on the warpath, and living hand-to-mouth never make it easy, but my oh my—Texas my Texas! What a land! Don’t miss this breathtaking addition to the Cross Timbers Romance Family Saga!

It’s always good to give thanks. And I’m thankful for you! I appreciate you stopping by my awesome Celebrate Lit Blog Tour! I’m thankful for each of the bloggers who signed up to participate in the tour for my January release Texas My Texas, book two in my new Cross Timbers Romance Family Saga series! And I’m so thankful the Lord is blessing Celebrate Lit as Sandy Barela blesses so many Christian authors! She is deserving of all God’s best!

In Book One, Gone to Texas, I got seventeen souls to their new home in the Republic. Texas My Texas has all the same pioneers with a few new added as they establish hearth and home in the wooly, untamed Trinity River Bottoms of North Central Texas—which later in history, becomes the Dallas-Fort Worth Metroplex. They’re settling in what now is Irving—my home for fifty-plus years.

Only a few months has passed for my characters, Book One ends in November, Book Two picks up in March, 1841. In real life, it’s been just that long since Book One launched, too! It debuted in September and Book Two launching now is also four months! Isn’t that fun? Originally, I’d planned a different January title but pushed it back a couple of months to release Texas My Texas on the heels of Gone to Texas.

In this new story, the two young women—Gabrielle and Isabel Harrell—elicit the attention of suiters who come calling even in the wild west territory. Thomas Baldwin (a neighbor introduced in Gone To Texas) has an eye for Gabrielle and uses many excuses to visit, including taking his friend Monroe Humble to the clan’s little settlement to meet the lovey, hardworking Isabel.

But Gabrielle is pining hard for her love back home and deals with pretty severe melancholy—what they called depression back in those days. In Texas My Texas, readers will spend time with the characters they came to love in Gone To Texas. As always, I pray my story gives God glory! And that readers will enjoy the new even better than the old! BLESSINGS!

I love the author Caryl McAdoo and her way of dosing her readers with strong faith and strong characters. A unique to Texas history and style of language this story came to life for me in these very pages. Gabrielle is a character that we have seen such amazing and realistic growth from that I really liked her in this book.  Yes, she struggled with being a mom and letting go of what she thought was going to be her future. That is relatable for many young women who think a child will fix their relationship.

In this book, we learn a lot about how to overcome and face challenges. The characters are vivid and filled with personality that leads a reader to determine their friends and foes through the story.  God works through the keyboard of this author and his ability to come to life in the faith of this story is one that will leave your heart full and at peace.

To celebrate her tour, Caryl is giving away

1st Prize – Signed, Paperback copy of CHOICE of all my books,

4th Prize – eBook copy of CHOICE of all my books,

Find out all the details and enter to WIN at Texas My Texas Celebration Tour Giveaway.