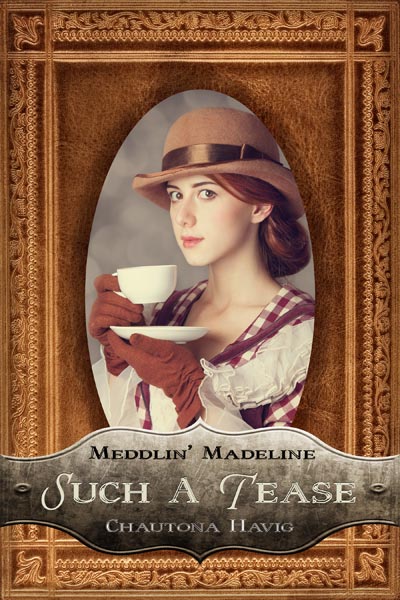 Madeline, with a little assistance, discovers her old adversary is gaining a following in Rockland! Can she expose him for the fraud she’s sure he is?

Rockland:1901
In book two of the Meddlin’ Madeline series, Madeline Brown has a new endeavor to occupy her time. But is it to keep her out of the way or a reward for her work in Sweet on You? With the help of her young friends, Madeline discovers her old adversary is gaining a following in Rockland! What’s a girl to do?

However, her new position also gives her opportunities to observe, and what she sees sets more than one new investigation in motion. What does her old suitor, Delbert Jackson, know? Why is Mr. Merton giving important papers to that scoundrel, Vernon Smythe, and whatever happened to poor Abigail Cooper?

Add to these intriguing questions Henry Hardwick’s continued attentions, Edith’s newfound devotion to the temperance movement and Madeline’s determination to find her a more reliable suitor, and strange behavior from her Aunt Louisa and things heat up as summer fades from Rockland.

Unfortunately, her dear friend, Russell, busy with an important project at work, finds himself unable to help keep her out of trouble and away from danger. Is Madeline going too far? Will her meddling get her in serious trouble this time, will it destroy her reputation irreparably, or will she rid Rockland of a scoundrel once and for all? 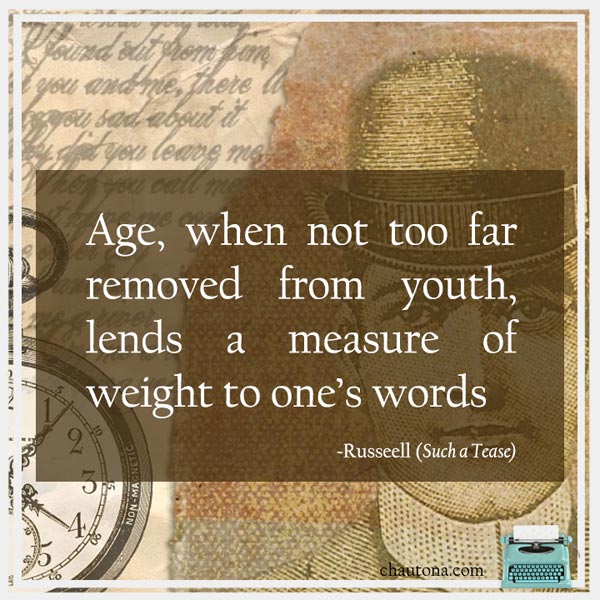 Leon Czolgosz is my new nemesis. He’s dead, but he ruined my book. No, really. The guy totally destroyed the opening pages of Such a Tease.

Now, these days, not a whole lot of people remember the name of Leon Cozolgosz. I didn’t. But I’ll never forget him now (although I may never remember how to spell his name).

Who is he? Only the guy who shot President McKinley. Why am I annoyed with him over a hundred years later? The idiot did this thing on September 6, 1901. You know, four days after this book opened? Yeah. Couldn’t he have done it on say… January 6, 1901? Even January 6, 1902 would have served my purposes.

Look, I’m not as callous as I appear. Truly. But if President McKinley had to die, did his murderer have to do it when it would completely mess up my book?

How did it mess up my book you ask?

I’ll tell you. I left it out—the whole assassination thing. There I was, fixing a wedding date for one of the characters, when a thought occurred to me. She could be married on Flag Day—if Flag Day was a thing then. I didn’t think it was. I really thought Wilson was responsible for that—you know, creating holidays in between his notes to Kaiser Wilhelm of Germany or something like that. But I hoped. Somehow—just maybe. I mean we had Labor Day from Cleveland, why not Flag Day from McKinley. But noooooo. He didn’t. What did he do?

He got shot. Four days after my book opened. And there wasn’t a single word about it in the story.

Like I could ever get away with that. This was news! Big news. And nothing about it in the life of a daughter of a politician? I think not.

Not only did this Leon Czolgosz (no, really. It’s spelled correctly) shoot the president on September 6th, but he didn’t do a good job of it! Look, I think I’ve established that I didn’t want President McKinley killed. But if the guy with the unpronounceable last name had to do it, couldn’t he have done a good job of it? Couldn’t he have shot the president in the head? McKinley suffered for eight days before he died. Eight days! They thought he was getting better and then gangrene killed him.

It would have been a mercy had Leon just shot McKinley in the head or the heart. Why the abdomen? Cruel, if you ask me, even for an anarchist.

And it made adding the whole affair to my book even more problematic. No, really! Think about it. I couldn’t have the newspapers announce the death of President McKinley on September 7th and then have a few mentions of the bank being affected or something. No… no… now I had to have a headline event, give false hope, and then add the death on top of it all.

Look, I do an obscene amount of research for my books. No, really. Keen was slang in 1901. Woohoo! Look up “peachy keen”? Yeah. Can’t use it. 1950s. The telephone? Can Madeline expect to use one in a burgeoning city in 1901? Considering there were over 850,000 telephones in use, yes. I don’t think it’s unreasonable to assume that a photographer who works for a local paper might have a telephone in order to receive calls requesting him to come photograph some big event—like the Mayor’s speech on the death of President McKinley, perchance?

Yep. Somehow, I almost missed one of the biggest events in US history. Research saved the book—and ruined my timeline. All at the same time. Gotta love history. Or not.

And Leon Czolgosz? Yeah. Thanks for nothing.

Every time I read a book by Chautona I feel like Anne of Green Gables is alive. Her writing is how I always picture Anne writing, and her characters are so life like, and filled with imagination.

Madeline, Madeline, how much I adore thee. You make stories fun and for the time setting are revolutionary in your thinking. I just want to be the mitten on your hand, helping you solve crimes. I love how much I am reminded of being carefree. Madeline also makes me think of Nancy Drew, with her nose seeking the truth and honesty will prevail. Now in this book, I found myself deep into the setting (love historical settings and periods). It is always a pleasure to travel back in time with Chautona’s work.

I found myself giggle at Madeline’s aunt. Oh my, is she the perfect image of that time period’s women. I felt like Madeline gave her grey hair and made the sleek look feel a bit ruffled. I just loved her thinking as well, and it provided some great comical moments.

Overall, this book was a blast to read. Giving Madeline more free rein to sleuth and be independent within the time period. I say it is worth a Saturday cozy read!

To celebrate her tour, Chautona is giving away a Reader’s Teaser Package
that includes:
A paperback copy of both Sweet on You and Such a Tease
A “Tea-for-One” teapot
A Tin of loose-leaf tea of your choice (six options available from our local tearoom)
A pound of assorted See’s chocolates
A set of six handmade antique-inspired note cards
A $25 Amazon Gift Card
And, for the teaser… the winner will also receive the exclusive short story (usually reserved for pre-orders) The Fate of Abigail Cooper!! Click HERE to enter. Be sure to comment on this post before you enter to claim 9 extra entries!

Purchase "Meddlin' Madeline: Such a Tease" on Amazon
Follows