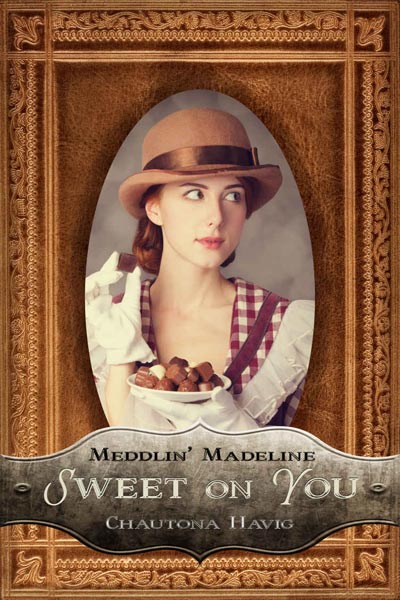 It is my hypothesis that social conventions are created to test our fortitude. Rockland circa 1900- As the mayor’s daughter, Madeline Brown enjoys a rich social life that many might envy. But a sharp mind and a growing talent for observation leaves Madeline torn between avoiding social censure and exploring the world around her. With an aunt who considers higher education and employment equally unsuitable for the mayor’s daughter, there is little to amuse her save endless committee meetings, evening socials, and her favorite pastime: curling up with an exciting detective novel. The temperance and suffrage movements hold little interest for a young woman who has just endured the rigors of her father’s mayoral campaign. So when a young man shows interest in her friend, Madeline’s interest piques–until his actions hint that he might not be the upstanding gentleman everyone presumes him to be. Unable to ignore her concerns, Madeline finds herself in the middle of an investigation into his character and discovers a side of Rockland she’s never encountered. Will her new hobby reduce the tedium of her life, or will her “meddling” create tension for herself and her father? Will she be forced to squelch this budding skill of hers or has Madeline finally found her calling in life. Meddlin’ Madeline: Welcome to Rockland’s infancy. 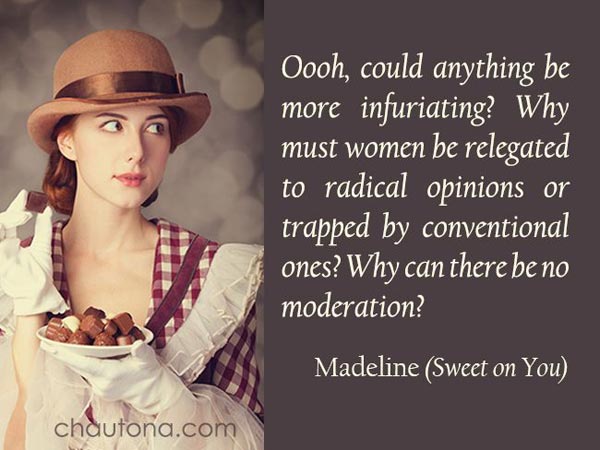 The idea for Madeline came while I was searching for photos for another book idea (one I still haven’t fleshed out yet!). I came across an intriguing picture of a girl wearing a bowler and loved it. I wondered who she was and what she was reading. Well… then I turned the page and… wow! Dozens of photos appeared—all in the same general theme. Bowler hat, gloves, late Victorian/early Edwardian clothes…. I could just see her riding through town on a “wheel” and solving crimes. And well, the rest was born. I had to narrow down about twenty pictures to five. I couldn’t do it. So, I did six. I just hope I can limit myself to six.

This is a historical novel, so that meant lots of research. Well, in the sense that it takes place in another period, anyway. Research proved much more difficult than you might imagine. You see, the world was in a state of flux in 1901. Victorian mores gave way way to a new, modern era—a new century! Though an exciting time in history, because everything was in a perpetual state of change, finding truly historically accurate information was almost impossible!

Additionally, the writing style is very different. This is partly due to a quirk of Madeline’s, but it is also because people used broader vocabularies back then. I wrote the book with a style that fit the era. It was difficult not to lapse into modern vernacular or even something a bit more twenties. After all, the series title was inspired by a song from the 1920’s!

This book begins a journey of self-discovery for Madeline. One of the things I wanted most to do with this book was to explore the “birth” of a detective—to show what it might be like for someone to realize that he or she notices things that others don’t. Through Madeline, I explored how people would react to having their secrets exposed, and I tried to show just how difficult it would be to investigate suspicious things without becoming deceitful or putting oneself in compromising positions. It’s easy to assume people would appreciate knowing if they were being taken advantage of, but would they really? Would pride not get in the way of things? I suspect it would.

Each book does have a definite “mystery”. But, these aren’t traditional mysteries. There won’t be a murder until the final book, but each one will increase in difficulty for Madeline and the reader to decipher the truth and will add a new element of danger and self-discovery. Addtionally, there’s an overarching story over the entire series that won’t be resolved until the end.

We have five more books to go! We’re just getting started with Madeline’s adventures. A sneak peek into the rest of the series: we’ll get to learn more about her best friend, Amy. I haven’t decided just what kind of girl Amy is, but I suspect she’s quite beautiful. I think that’ll play a part in a future book. She’s also likely to meet someone in her European tour. Will she be the friend with the suspicious letter in book four? Who knows? Not me!

One of the best parts about writing this series is playing with words that I grew up using and reading, but most people don’t use anymore. I had parents of a literary turn of mind, so I grew up being told to, “Slow down and enunciate.” This began at age 3. So, while other kids were told to “go potty,” I was told to “use the facilities.” I’ll never forget in second grade telling a classmate, “That’s your prerogative,” when she said, “I don’t like you.” She was… confused, I think.

Add to that the fun slang of the day, not to mention a quirk I’m not giving away, and I can honestly say I had a blast writing this book. However, I know not everyone is fond of sesquipedalian words or erudite language. So, with that in mind, I decided to write this glossary of words you will find in the book. Please note: definitions are mine and written with my tongue super-glued to the inside of my cheek.

There you go. It’s just a taste of what’s ahead. Happy reading!

So I learned a lesson when it comes to Chautona’s books NEVER miss an opportunity to read them. I did once, and it is the biggest blogger lesson I learned this past year. So when the opportunity came to read Sweet on You, I probably attempted signing up about four times (sorry tour group if I did). I was beyond excited. Chautona’s writing is going to make her a rising star in the Christian fiction and even Mystery world. She was gifted with words, and she applies that gift to each story she creates.

Madeline is the girl I want my daughter to be. Curious, observant, and kind Madeline makes her way out of the social class she was born into and explores those around her. Showing her strength as a friend and character through out this book. I also loved her interactions with the elders in her life, for the time period she was certainly unique. A super sleuth like Nancy Drew, Madeline has a way of being the mascot for “Curiosity Kills the Cat” only, spoiler alert she lives. But she is just as charming as Nancy Drew, and is now my favorite sleuth. Chautona’s style of writing become different in this book, I felt as though she was taking the time period she based the book in, and immersed herself into the style and language of the time. It is wonderful! Even if you haven’t read any of Chautona’s books before (trust me you are in NEED of reading them) this book will be a great starter into her world and you will quickly want to meet all her charming characters and stories.

I loved the twists and turns in this book, it compares to some of my favorite cozy mysteries. Madeline is a character that I can’t wait to meet more of, she is certainly making this reader excited at the idea of more adventures. I can’t wait  to see Madeline in her next adventure. Until then, I will be swooning my way through Chautona’s other books.

Have you reading anything by Chautona? IF so what is your personal favorite?

To celebrate her tour, Chautona are giving away a $25 Amazon gift card! Click the link below to enter. Be sure to comment on this blog post to claim nine extra entries in the giveaway!! Find out all the details and enter to WIN at Meddlin’ Madeline (Sweet on You) Celebrate Lit Tour.

Purchase "Sweet on You" on Amazon
Follows