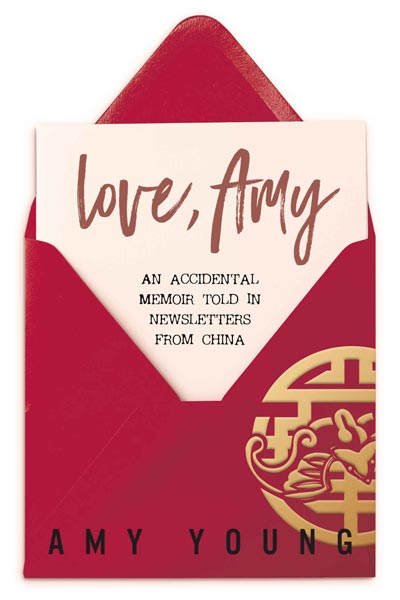 She came to China with a lesson plan. What she found was a new sense of purpose.

Amy Young traveled to China in the mid 1990s to teach English to educators. But she never expected the profound way they would enrich her soul. With the influence of the enchanting country and its extraordinary everyday people, Amy extended a two-year assignment to nearly two decades far away from home.

Starting shortly after her arrival, Amy shared her stories and her unique perspective through a series of letters. Her nine years of correspondence demonstrated a country going through growing pains: from political unrest to the SARS epidemic to budding prosperity. Amy battled language barriers, cultural faux pas, and invasive mice with nothing to lose. She even fought for her life with a potentially deadly illness, unsure if she’d survive to share her tale.

Throughout her journey, Amy drew strength from God and came to appreciate the beauty and power of an ordinary life lived well.

Love, Amy: An Accidental Memoir Told in Newsletters from China is one woman’s deeply moving journey of self-transformation. If you like humorous anecdotes, immersions in Eastern culture, and honest stories that aren’t afraid to dig deep, then you’ll love Amy Young’s heartfelt tale.

Buy Love, Amy for an inspirational guided tour into the heart of China today!

The tug for a life that is “Anything but Boring”

When I was in college the Hallmark Hall of Fame movie Sarah Plain and Tall changed my life. You’ve probably seen it and been moved too. Sarah, a spinster by the standard of her day, moves from Boston to the fields of Kansas to consider marrying a widower and help him raise his children and work his farm. Her brother could not understand why Sarah would move from so-called civilization to the middle of nowhere. But the longing she felt for her life to matter resonated deeply with me.

I was in the liminal space between adolescence and adulthood. Like Sarah, I knew I could stay where I was and live a good life, but I wanted more. And so I moved to China.

Our world is one that loves big, change-the-world stories. I love them too. I remember reading The End of the Spear, the story of Jim Elliott and his friends who were martyred for their faith. I also lost myself in the stories of Gladys Aylward, William Carey, Lottie Moon, and Amy Carmichael. I remember reading about a missionary that had some worm pulled out of his stomach that was the size of a large snake. Disgusting! Fascinating! All for the gospel! The life of faith was exciting and God was on the move all the time! While it is true, the life of faith is exciting and God is on the move, it is also ordinary, boring, disappointing, and confusing. When I started compiling the letters I wrote from my days in China, I was embarrassed by what “first year Amy” said. She was so clueless, so uninformed, so willing to display her lack of cultural knowledge. I wanted to put my hand over her mouth and ask her to please pipe down because she did not really believe what she was saying. But she did, “first year Amy” could not know what “fifteen year in China Amy” knew.

These change the world stories I love? Turns out they have been more sanitized than I realized without showing the cultural and ministry progression that must have taken place.

Even now, knowing what I know, part of me wishes my newsletters contained miracles and throngs coming to Christ because of my work. I thought throngs and miracles were what a “real” cross-cultural worker would do. I thought that would show that my life mattered, like Sarah’s when she moved to Kansas. Don’t we all want our lives to matter? I believed that mattering was measurable. By compiling and writing this book the lesson Love, Amy has taught me is that too often we confuse size with significance. I still hear the whisper that says, “Amy, really? You wrote about the cultural beliefs that influence standing in line and you think that is worth people giving of their prayer, money, and time?” Part of me is reluctant even now to publish these letters because they are common. In truth, I am happy with my life and the contributions I have made. Of course I have regrets and wish I’d handled certain situations differently. But if all we hear are the spectacular stories, we can miss the gift our beautifully ordinary lives can be.

Who made it into the Gospels? A widow and her two mites. A boy and his few fish. She is described as offering out of her poverty. His common lunch was used to feed more than he could have imagined. Jesus did not tend to elevate those in power or those who seemed impressive.

My first year, a fellow teacher in China told me, “You’re lucky you’re still in your first year. Wait until your second year and you have told all your stories. You’ll have nothing to say in your newsletters.” Isn’t that the heart of what we fear—that we will have nothing to say with our lives? The secret to combating this fear is not that secretive. Show up and be present. Taken individually, these letters don’t add up to much, but put them together and much to my surprise, month after month I wrote an accidental memoir.

As ordinary as it is, I do have to say, life in China was anything but boring! If you love memoirs and want to hear stories that will make you laugh or cringe (and sometimes both), join me on a college campus in China.

Amy Young is a third generation Colorado native, and the fact that she leads with this tidbit shows her love of the random. After growing up in Colorado, she moved to Kansas to study and ended up staying because it is far more beautiful than many think. She taught ESL and junior high math for several years before she moved to China, thinking it would be for two years. Sometimes it's good to be wrong in life. More than two decades later she's an expert at packing bags, saying goodbye, and making friends the world over. She blogs regularly at The Messy Middle.

You can find Amy on: 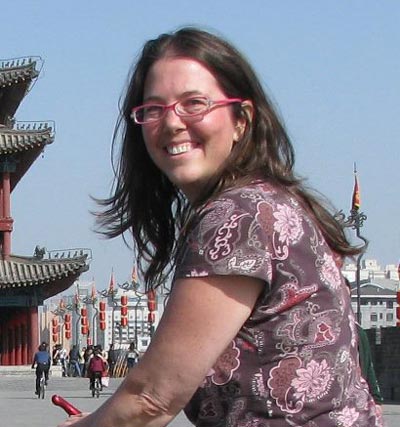 When this book showed up in my mailbox, it was at the perfect moment. I had been talking to a friend about the possibility of teaching English via Skype to students in other countries. Starting this book you get a sense for the emotions and tender spot the author holds for her subject, even with more beneath the covers than this, these reasons alone would make it a worthy read.

This is one of the best memoir covers! I love that we get the idea that we are reading a letter style, newsletter just based from the cover. And I have a love (obsession) for the buttery soft covers, and guess what this book is buttery soft!

I really loved how the author gave us the facts and her memories in this book. It was well blended. One part that I liked (because I have done this as well) is in year five where she talks about expectations and the power of them. She clearly has a good sense of humor, because I was excited to think about the language in Costa Rica (I’m an oddball). I would have been in tears to think of class sizes doubling, and  I agree that expectations aren’t going to just become the norm. I also love that even in moments where you could sense change, Amy gives us an ending note to smile about.

China and not just our textbook China. This was the real deal and super cool. It fed my wanderlust spirit and gave me a chance to visit a new place via Amy.

I know some may think that memoirs are not their thing. Trust me, faithful readers usually they aren’t mine. But this book is special, it is a testament to a women’s devotion to her faith, and culture that wasn’t hers. It shows the depth that we can all go to in order to make a difference. I think we need more stories like this in the world.

Have you taught in a foreign country? Would you?

To celebrate her tour, Amy is giving away a grand prize of a letter writing basket that includes a $25 Amazon gift card!! Be sure to comment on this post before you enter to claim 9 extra entries!! Find out all the details and enter to WIN at Love, Amy Celebration Tour Giveaway.