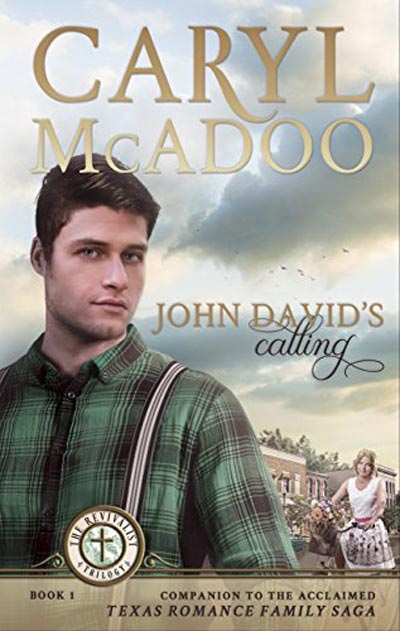 The spirit is willing, but the flesh is weak.
Born in sin, but redeemed by the blood, John David Nightingale rejects his mother’s heritage and embraces his paternal grandfather’s faith. What price will he have to pay? Vietnam looms and his love, Hannah Rose, beckons, but the call of the Lord is so strong, David must answer.

At just one-year-old, David John Prescott sat on the hip of his mother, Sandra Louise Harris Prescott in the end of CHIEF OF SINNERS, book ten (and last) of my Texas Romance Family Saga series. His biological father, Buddy Nightingale walked away from them both, choosing obedience to God over the love of his life and his son.

Staunch Church of Christ believers, his mother’s parents took in the baby while her guilt took her to Dallas and eventually France to oversee the care of her mentally deranged husband Harry Prescott. So David grew up in the Texas Hill Country, well loved and cared for, with his mother visiting as often as she can.

David’s paternal grandfather, Nathaniel Nightingale (from Texas Romance’s book eight and nine COVERING LOVE and MIGHTY TO SAVE)—once a famous tent preacher with a healing ministry—has been close, quitting the road to pastor a nearby Holiness Church. As David grows, he sees him occasionally when his father Buddy visits from Alabama and Gramps always came to watch him play sports.

From a long line of people who love the Lord, I thought to write a trilogy titled THE REVIVALIST. JOHN DAVID’S CALLING is book one.

At fourteen years of age, David stepped in to rescue a little third grader being bullied and instantly became her hero. As Hannah Claire grew, doting on him, making him gifts and cards, swooning, she won him over, and PawPaw allowed him to visit her church one Sunday a month.

The second book in the Trilogy will be HANNAH’S WILDERNESS, and then I’ll wrap up their stories with book three, KING DAVID’S TABERNACLE.

I’ve so enjoyed these characters—the Buckmeyers, Baylors, and Nightingales—I find it hard put them on the shelf. They’re like family. I’ve even got one story started that’s a contemporary called THE KING OF TEXAS, with Patrick Henry the III as hero.

As all are written to stand alone, it’s never necessary for readers to know all the ancestors to enjoy JOHN DAVID’S CALLING or any of the series really—though I’m pretty certain reading the Family Saga in order would be the best! So if you love David’s book, you might want to go back to VOW UNBROKEN, book one and read all ten. I think you’re sure to love them all!

One thing I love about this JOHN DAVID’S CALLING is that it takes place in my days. I graduated high school in 1968, same as David, so he lives through the same times as me! That’s really been fun. But I must say I do resent it being called a historical a little J LOL

As always, I pray my story gives God glory and that its readers will be drawn closer to Him through it. He blesses me and highly favors me daily. I cannot thank or praise Him enough! Thank you for reading my stories!

I love when an author gives readers a spin off series from their other series. It is as if we get to see beloved characters in a new light. Specifically David, a character you have met in her other series but truly get to know in this book (I know it is his book). One thing I love about this book and David is his conviction with faith and God. We see him face a realistic struggle and work through it as many of us would. I felt my heart ache and rejoice many times throughout this novel.

I think this book was such a reminder that God is good. He has called upon this author to deliver stories that will connect readers to the Lord, and provide them with a reason to love this new series. David will touch your heart and make you feel a new kinship with David and his love Hannah. It is real, raw, and personable with characters that will feel like family at the end.

To celebrate her tour, Caryl is giving away:

Find out all the details and enter to WIN at John David’s Calling Celebration Tour Giveaway.