April Gardner is an author that can create a world a reader wants to be in, she adds a style and flair that are haunting and leave a reader begging for more.

This has been a favorite book of mine. Containing suspense, love and history, I truly couldn’t put it down. To be privileged to share the author’s insight with Marcus the man we all love- is exciting!

I hope that you enjoy the post as much as I do. Let us know what you think in the comments!

Drawn by the Frost Moon:
Bitter Eyes No More
(Book 4) 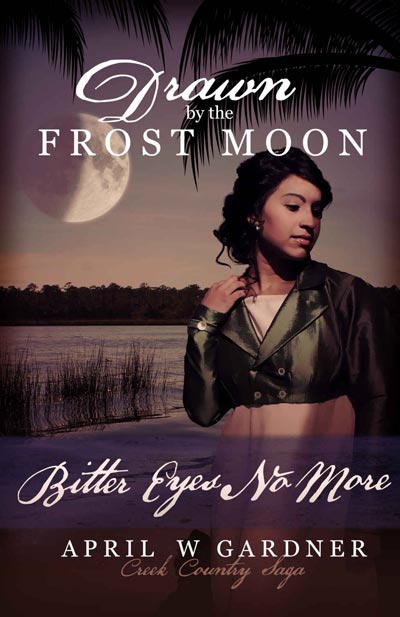 There he is, that fictional character of mine, descending the spiral staircase in Don Diego’s hacienda courtyard. And looking rather dashing in his uniform, if I do say so myself. You’ll find Captain Marcus Buck in the setting of my historical romance, Bitter Eyes No More, which is where we’re at now.

Not counting the surly Spanish guard who follows him down, Marcus is alone. Which is perfect. I’ve been trying to catch him alone since his ship limped into the San Marcos harbor yesterday. Captain Marcus Buck is a surgeon in the army, and I’ve been itching to talk to him about this little excursion into Spanish Florida I’ve sent him on.

I duck behind a pillar because I don’t want him to see me yet.

He’s stopping in the corner of the courtyard where pavers give way to a patch of black earth cultivated with palms, yucca, and castor, the last of which rise so high its topmost leaves hang over the upper banister. The season’s bitter temperatures haven’t sat well with it, and frost-shriveled leaves litter the slate.

He circumvents the winterized fountain and choses a café table that has a solid view of the upstairs room. And I know why—that’s where Miss McGirth sleeps.

Yawning, a Spanish soldier slouches against one of the numerous columns that supports the second-story arcade.

Marcus disregards the man’s lazy-lidded stare and withdraws his pencil and pocket notebook. To the jeer-jeer of a blue jay presiding over the birdbath, he begins writing.

I spy on him a little while and let him eat the breakfast he’s been served. Then, I walk up quietly, loathe to disturb his furious notetaking. “Well, hey there, Captain Buck.”

He looks up from his notebook, eyes wide with surprise, and gallantly pops up to help me with my chair. “Mrs. Gardner. How pleasant to see you again.” He wears a sweet smile that crinkles his eyes.

I accept his help getting seated. It’s nice being pampered, and he’s good at that. Although, I don’t think he realizes I’m his creator. If he did, he would probably make me sit on the cold hard slate for putting him in this situation. I let that last thought simmer for a sec before trashing it. Marcus is too tenderhearted to stand the sight of anyone suffering discomfort. Even his malevolent creator.

“Same here,” I reply and mean it. I’ve missed him since our Ebony Cloak adventure. “Didn’t expect to find you this deep into Spanish Florida.” A lie, but I’m curious to know what he’ll say.

He leans in, his smile morphing into a darling, conspiratorial grin. “If you were the Spanish commandant, I’d say I didn’t expect to find myself here either. But since you wave the stars and stripes as loyally as I, I’ll confess there was no storm at sea, and any damage you see on the U.S. frigate in the bay was done by our own hands.”

“Oh?” I lean in, too, meeting him over his steaming cup of coffee. “And why would you harm your own ship?”

“For an excuse to put in here for repairs.” He taps his pencil on the marble tabletop. “And perhaps, should the good Lord smile on us, turn over evidence that the British and Spanish are arming the Indians against us, in violation of treaty.”

“Very clever of you.” I give a long thoughtful nod to show how impressed I am.

I’ve always admired his brains. He’s impulsive at times, when led by his heart instead of his head. But clever. Clever enough to try his hand at blood transfusions in the age of bloodletting and leaches.

“All the best with your political intrigues,” I continue, with a motherly pat to his hand. “It’s high time those Brits realize we beat ’em.”

“Twice.” He beams at me, and I think he’s probably the most charming male lead I’ve written to date.

“But you surprise me. If I’d had to guess, I would’ve said you were here to take the don’s lady for yourself. She’s rather lovely and in sore need of rescuing, and you and your smart sword arm seem up to the task.”

“Quite perceptive of you, ma’am. Up to it or not, the task is mine. Her father sent me to bring her home. He worries over her and for good reason. Apart from her, ahem, indecent relationship with the don, Miss McGirth is in the employ of a man whom I strongly suspect arms our enemies. As you can imagine, this puts her in a precarious position with our government, and should I not extract her from San Marcos before General Jackson marches in, there’s a good chance she’ll be dubbed a traitor and hanged.”

“That wouldn’t do her pretty neck any favors.”

“Indeed, no.” He’s putting the coffee to his lips when one of Miss McGirth’s double doors creaks open. The blue jay shushes and as he stares, the coffee steams his nose.

Lillian McGirth emerges, wearing the clothes she’s slept in—white linen cap and bed jacket that ties in front—but her hair is down and everywhere. It’s in complete disarray and stops his heart mid-beat. I know this because, from my chair, I hear the echoing silence in his chest, and inwardly, I clap my hands like a kid promised a trip to Disney.

Sensing I’m intruding now, I stealthily slip from my chair and leave him to drool in semi-privacy. But before I get too far, I indulge in a peek inside his head…

A few pounds would complement her frame; a touch of health, her complexion, but God forgive me the libertine thought, I’ll take her precisely as she is.

That’s my darling Marcus, and I’d love for you to meet him. He can be found in Bitter Eyes No More any time, but I can’t promise he’ll be available for a chat. With sick babies to heal, Spanish dons to fight, Creek Indians to subdue, and beautiful women to resist, he’s a rather busy fellow. But if you’re quiet and sneaky like me, you can hover overhead and watch him work. Trust me, you’ll enjoy every moment.

APRIL W GARDNER writes history with a Christian perspective and a little imagination. She is a copyeditor, military wife, and homeschooling mother of two who lives in Texas. She writes Christian historical romance with a focus on our Southeastern Native Tribes. In no particular order, April dreams of owning a horse, learning a third language, and visiting all the national parks.

April loves to hear from her readers at: 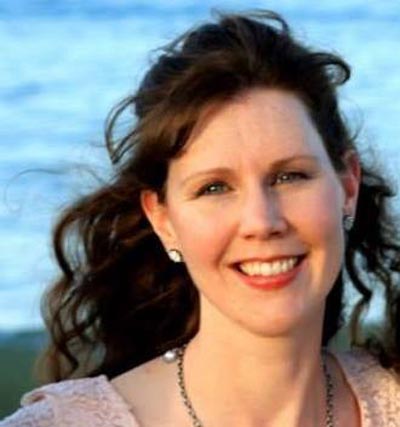